The third round of Cheshire Kart Club 2014 Championship took place on Sunday 20 April. With 5 Hondas racing, Samuel was given 2nd, 1st and 3rd for his random grid starts. 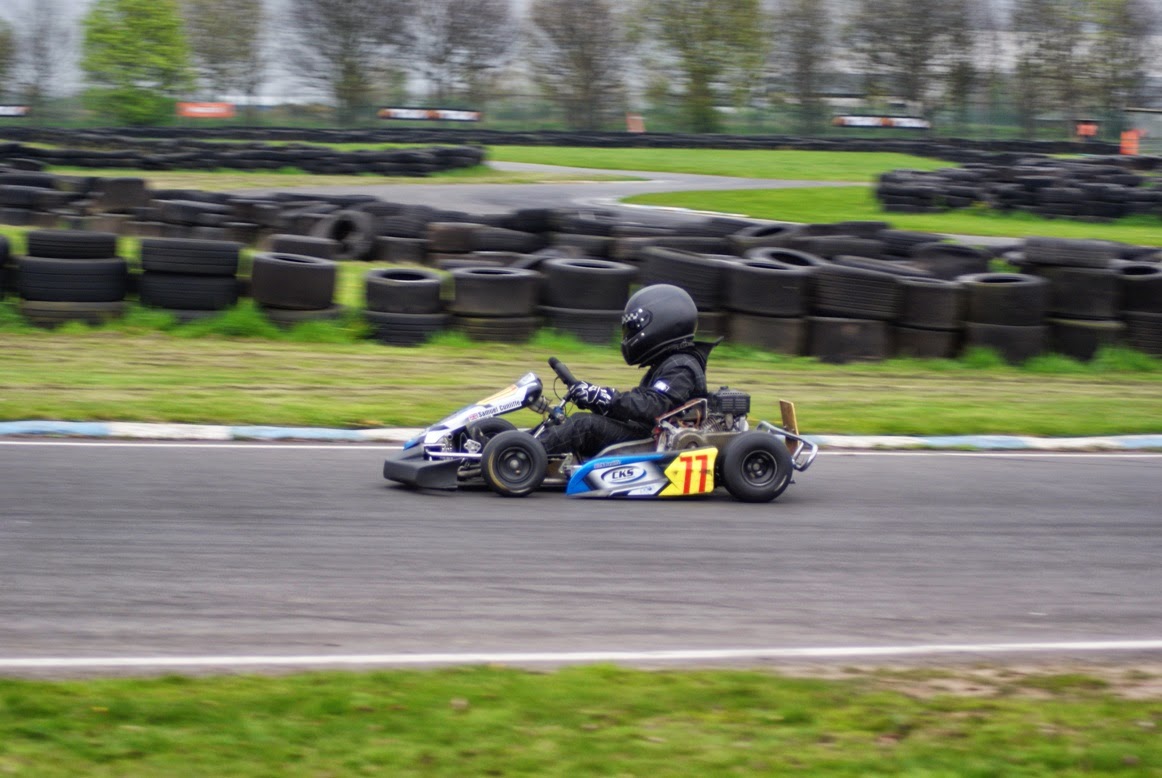 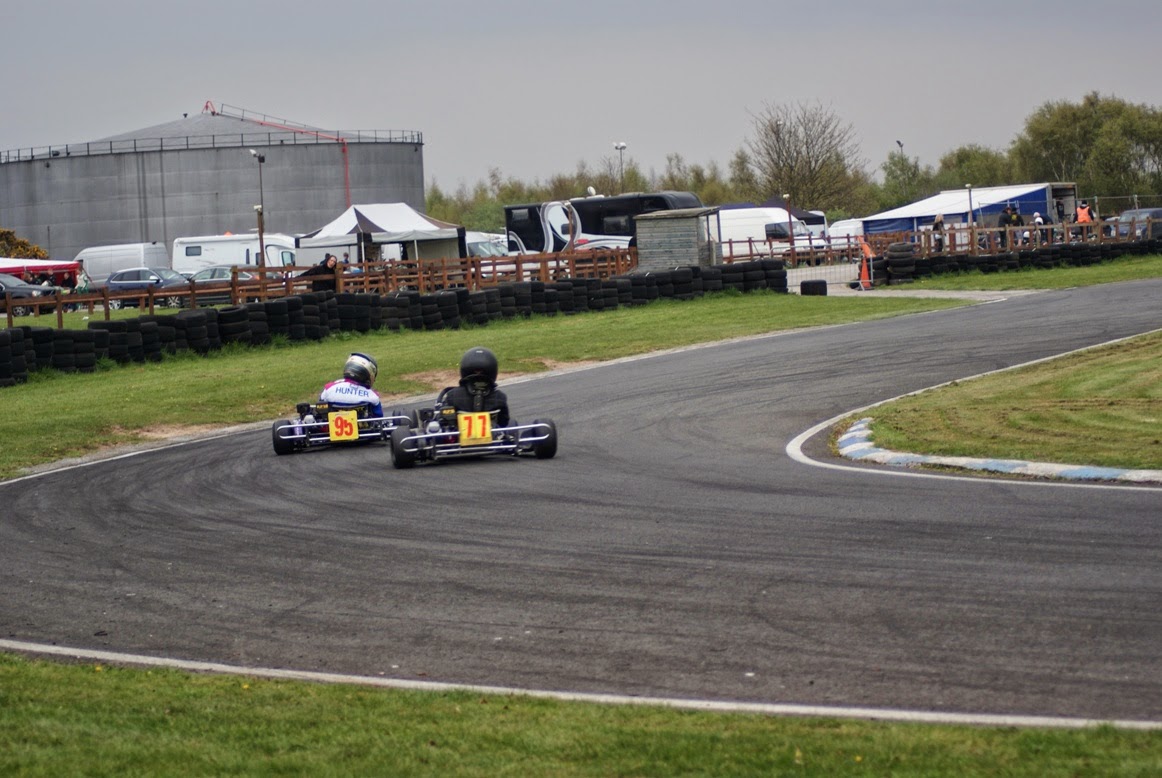 He had a very close first heat with Kai Hunter, exchanging the lead a number of times; Samuel crossed the line in second place 0.2 seconds behind but claimed the fastest lap of the heat with a 42.75. 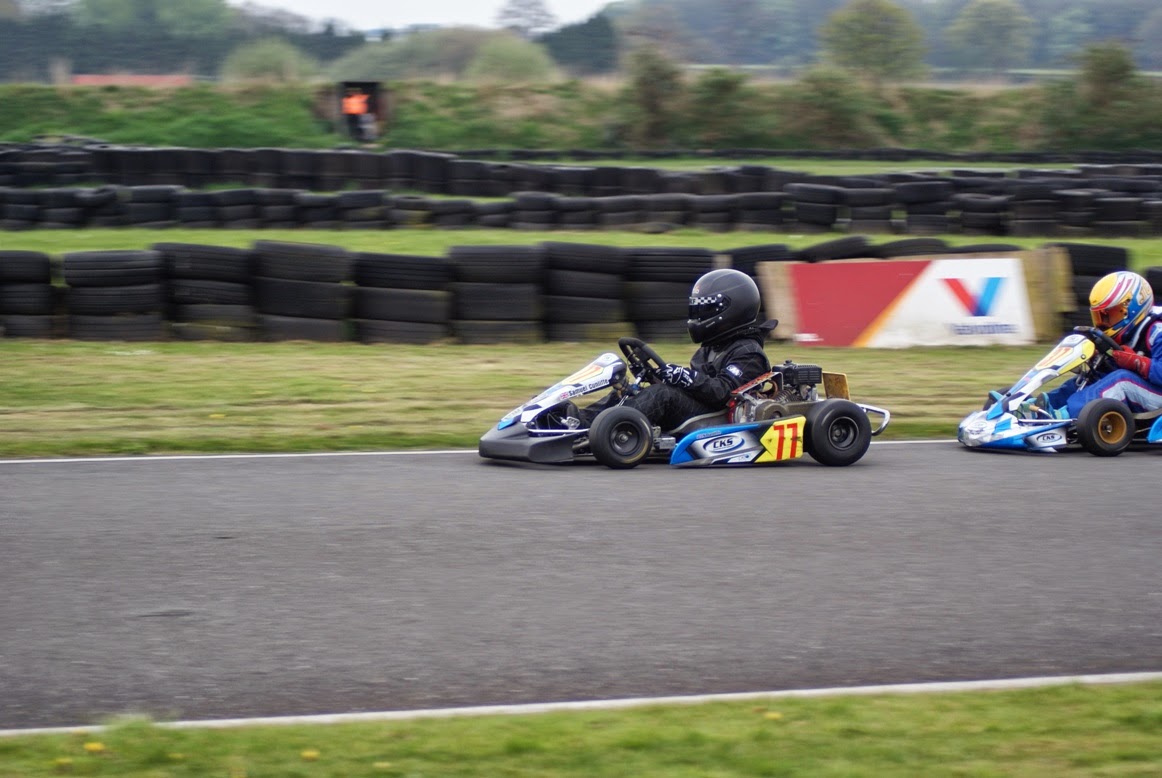 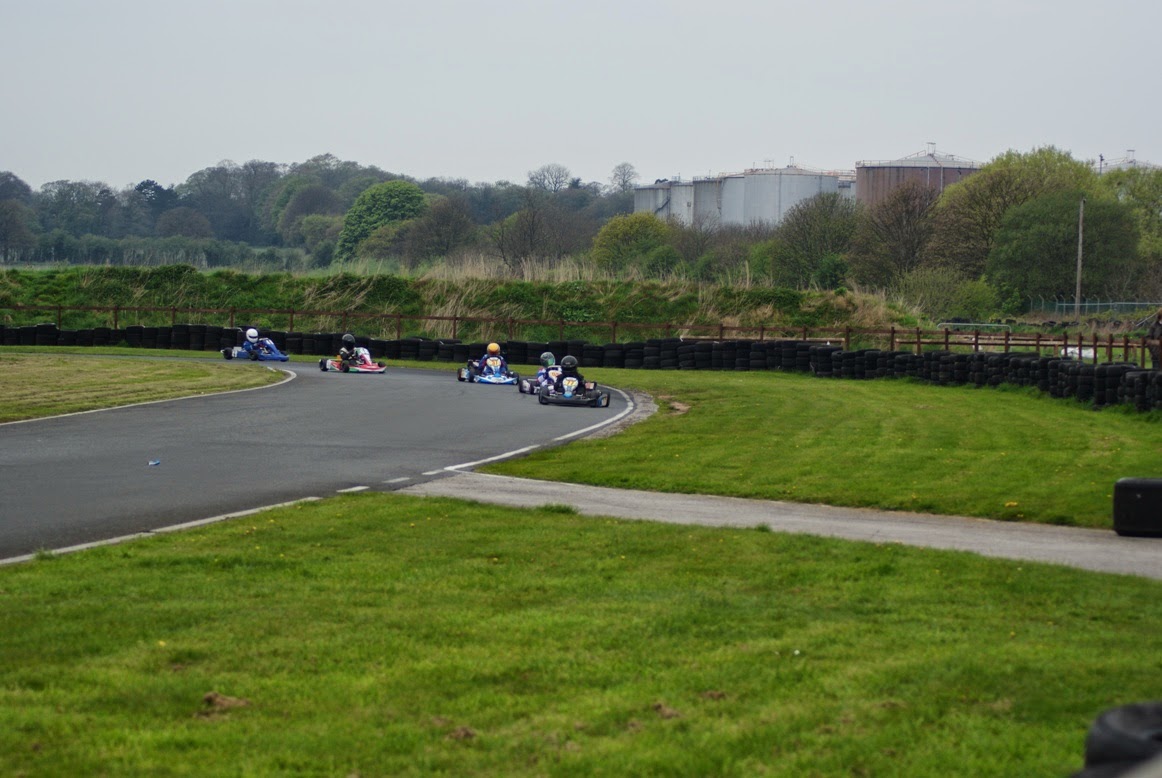 Heat two and Samuel lead most of the heat but again, very close racing and he crossed the line in second place 0.1 seconds behind Kai. 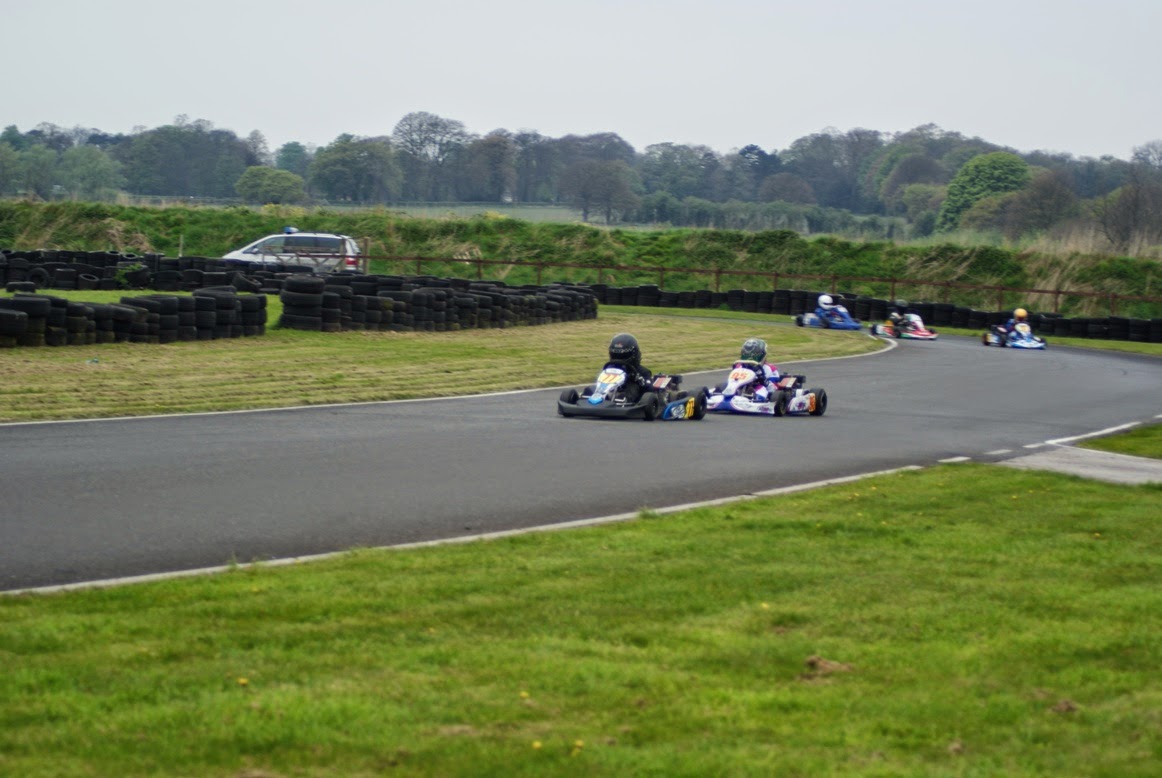 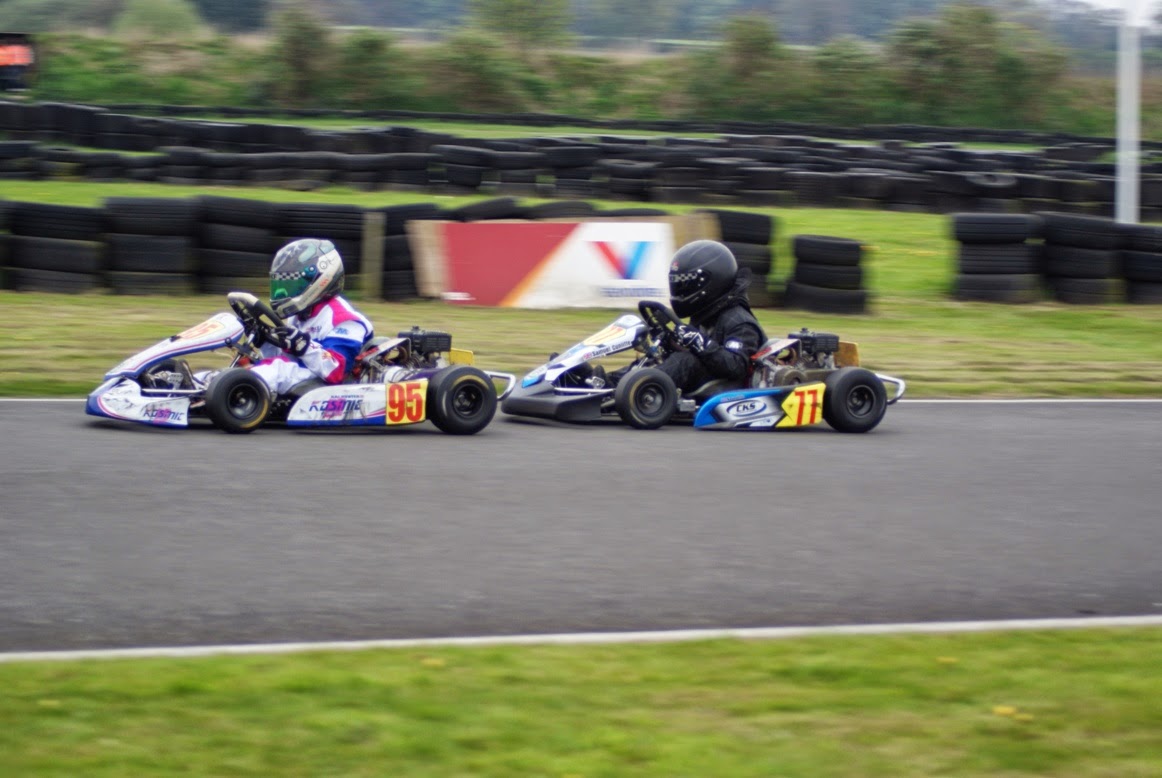 During the lunch break Samuel was interviewed by a film crew from Super1 TV Productions. 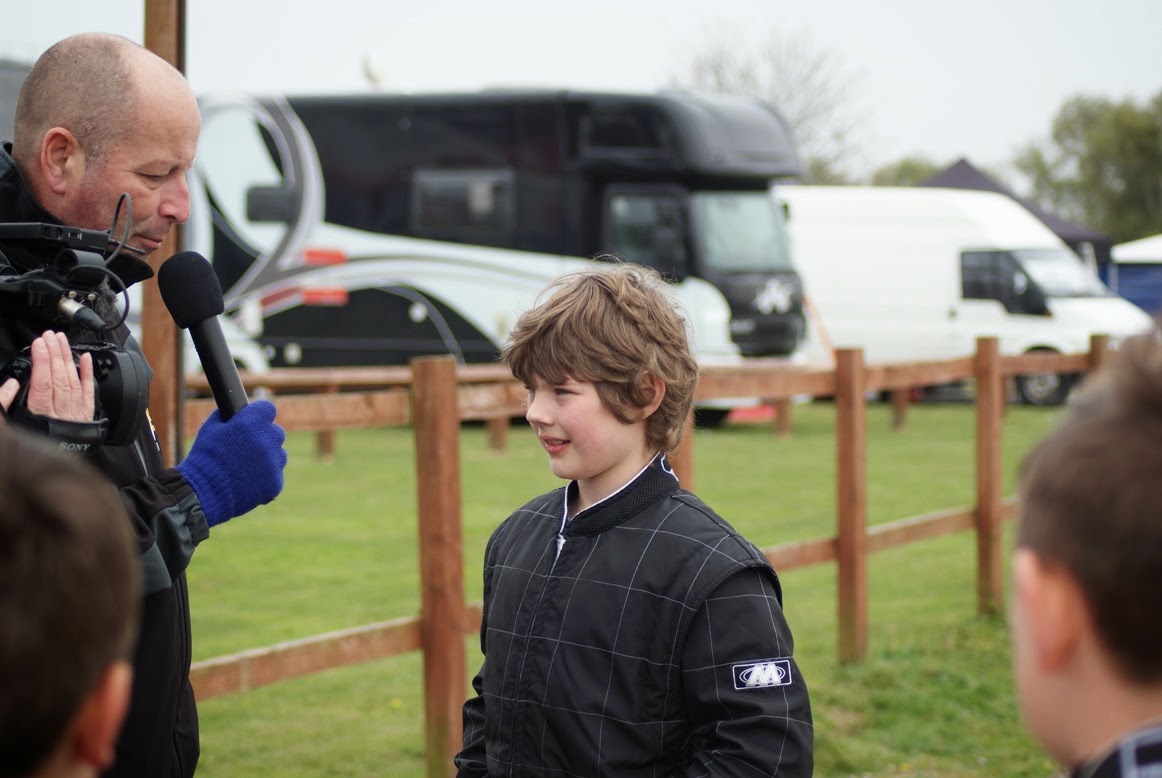 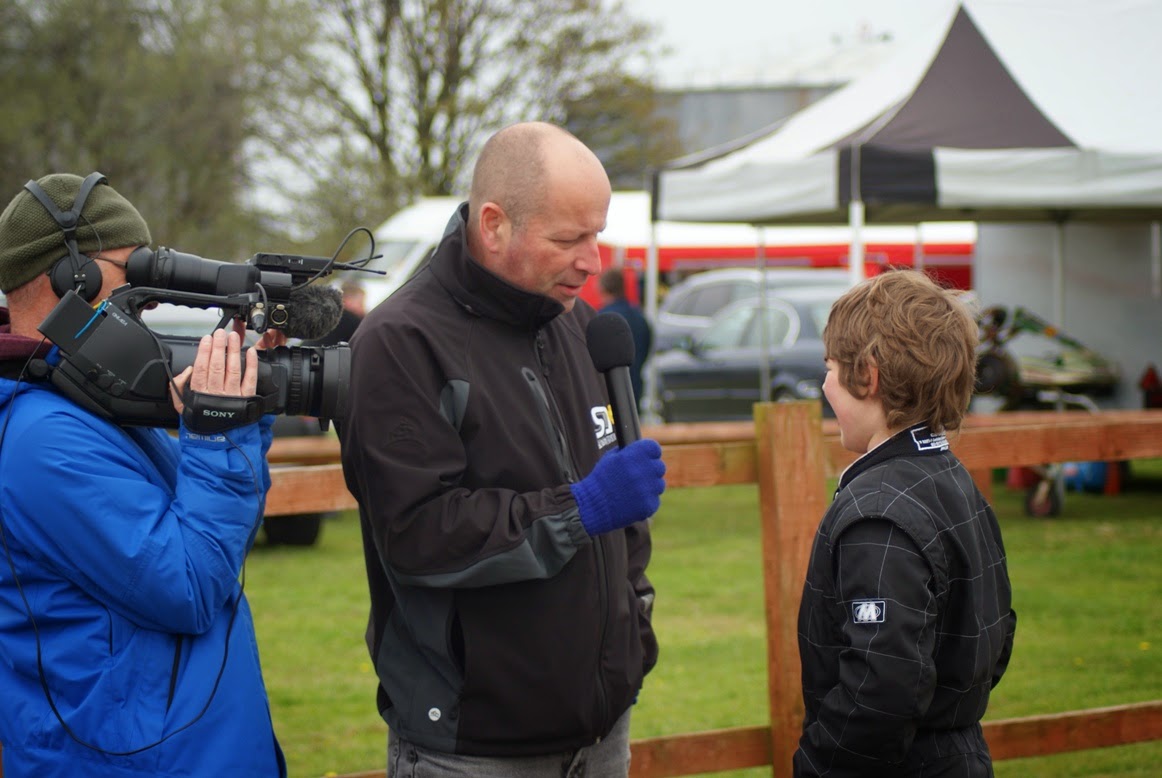 Third heat and again, Samuel lead most of the heat and this time the times were even closer with him and Kai virtually side by side crossing the start finish line. Samuel claimed the fastest lap again with a 42.54 second lap. 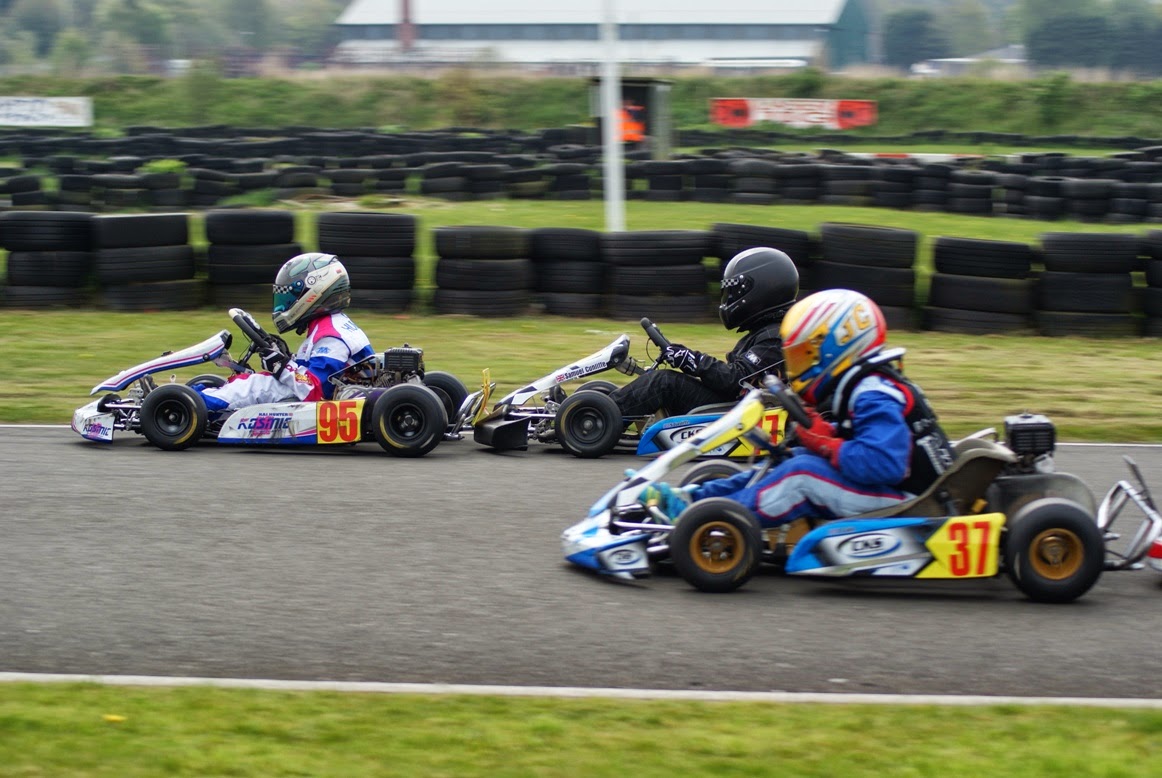 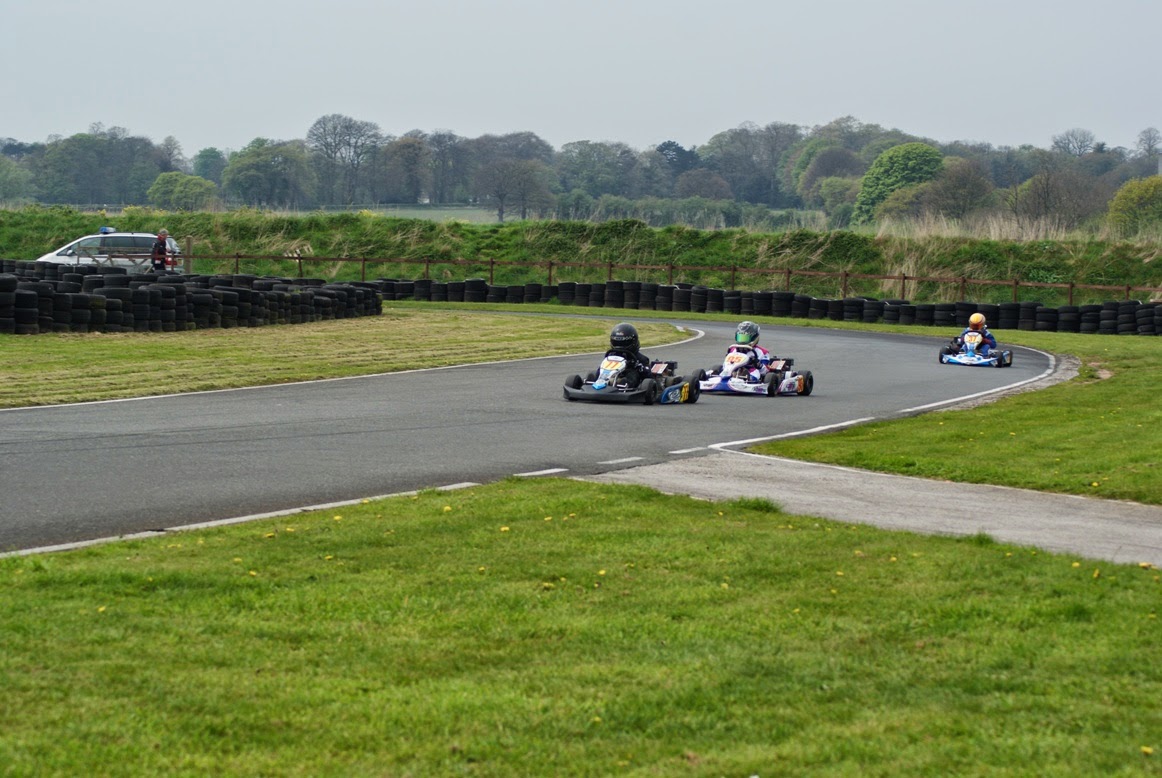 Samuel started in second place in the 12 lap final. And once again, the racing was very intense with Samuel gaining the lead on lap 4 - him and Kai crossed the line at the same time but Samuel gained the advantage and stayed in the lead until lap 9 when he dropped back just 0.08 seconds. He pulled it back on the penultimate lap and set a new Championship lap record of 42.31 (and also track lap record!) Kai gained an unfair advantage on the next to last corner of the last lap, pushing Samuel off and was subsequently disqualified; Samuel took the win and the top step on the podium. 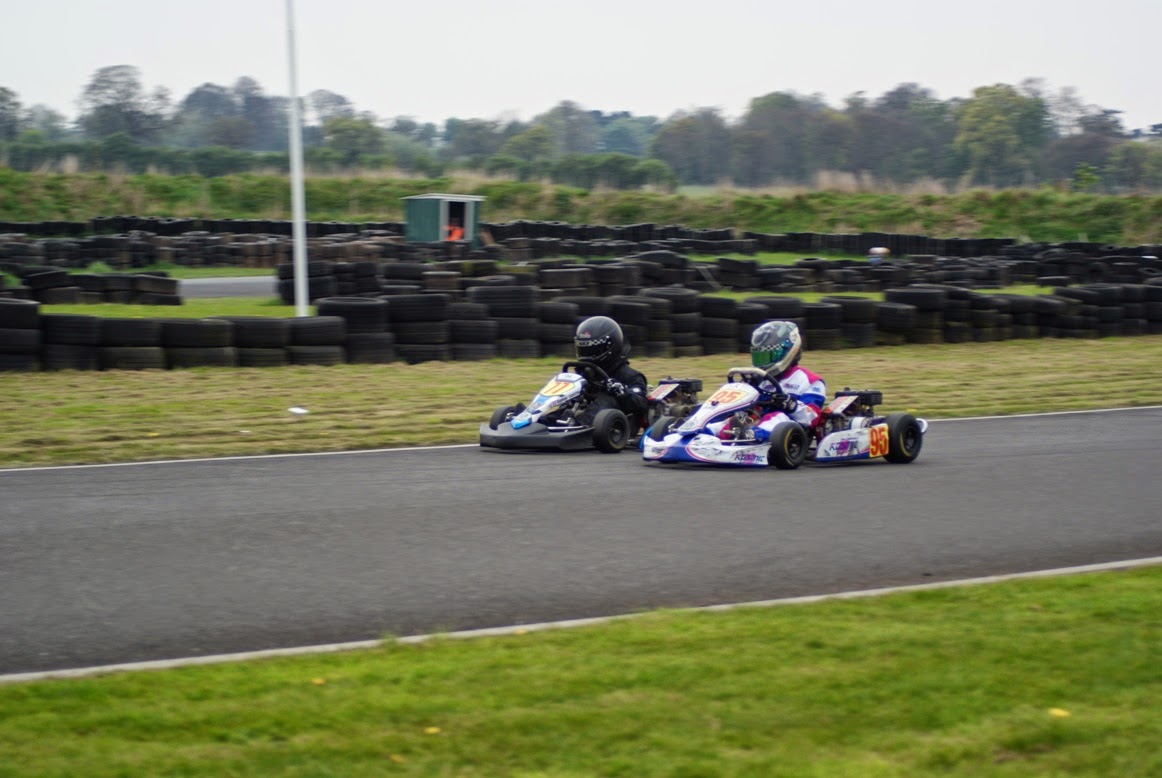 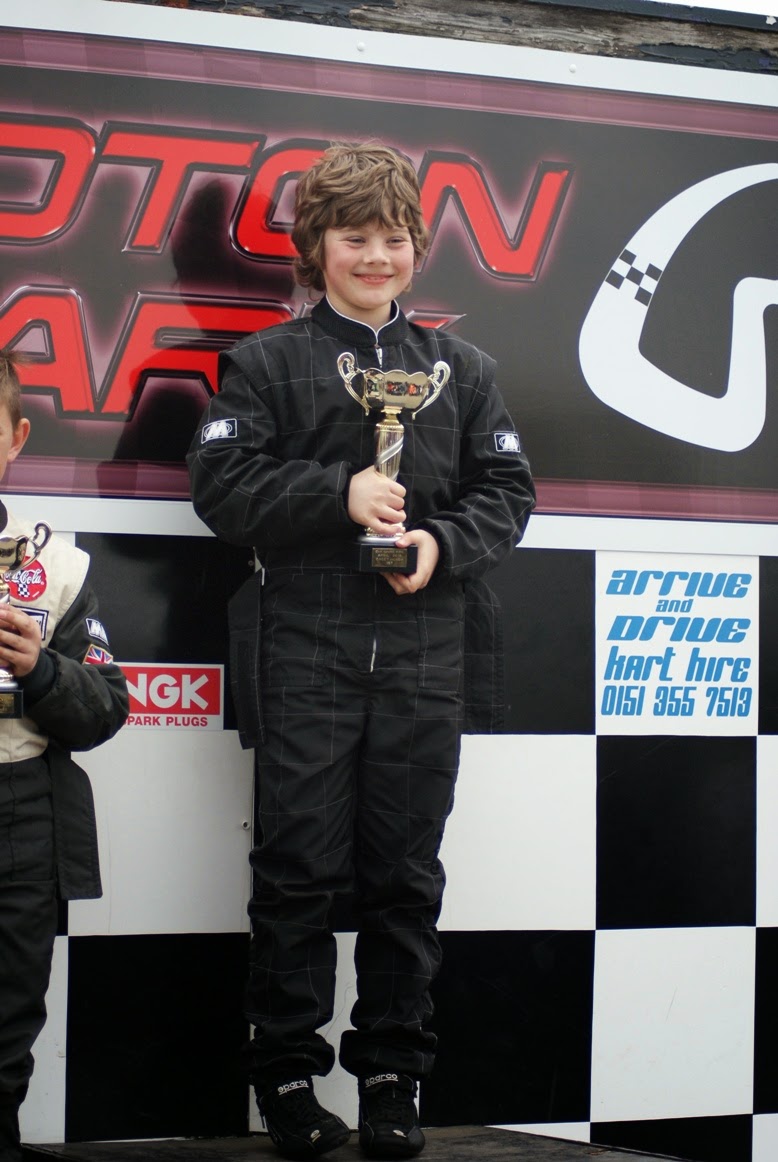 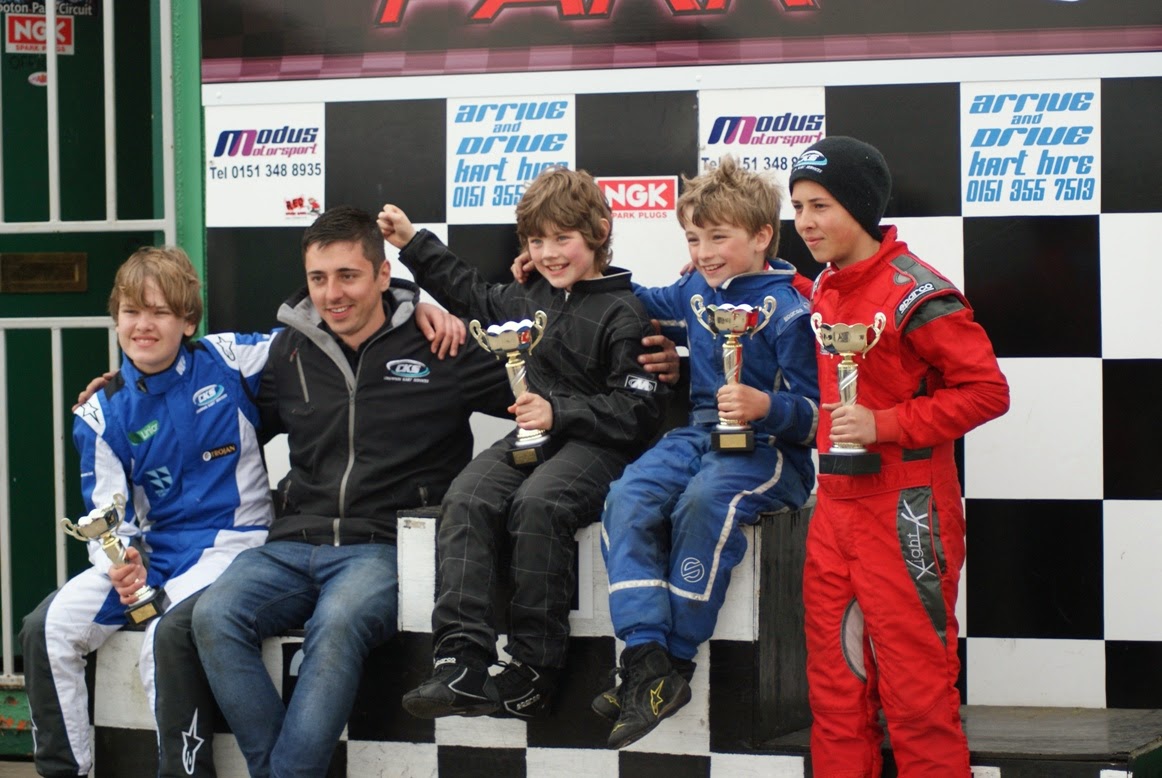 Collectively, the CKS team had a great racing day - as well as the Honda Cadet win, Ross took home the IAME Cadet, Nathan the Mini Max and Aaron a second place in the Senior Rotax final.
Posted by samuelandjacob at 21:00 No comments:

The first rounds of the Trent Valley Kart Club Championship and also NKF took place on 6 April. Samuel had only raced here once before, late 2013 and had only managed a few practice days so he still had a lot of learning to do on the track. Plus the Honda grids are huge (35 for this race) which was a little daunting although by the end of the weekend he had risen to the challenge. 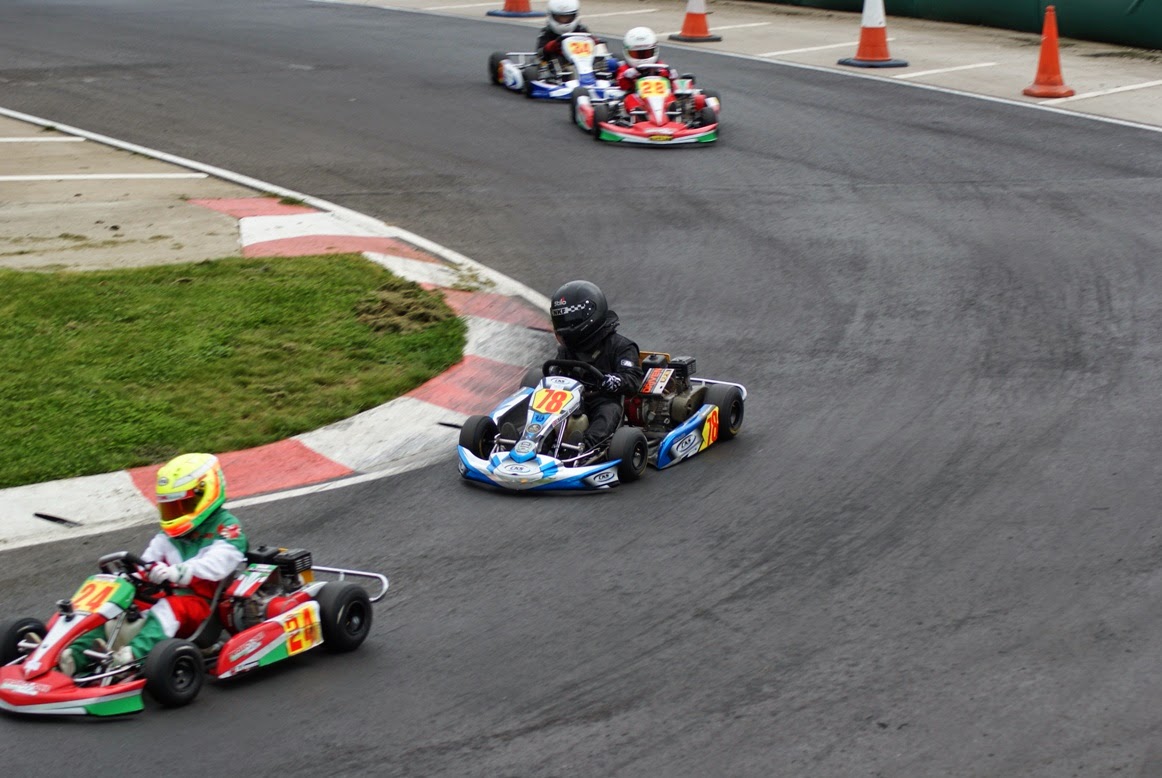 The first heat was wet and he started 22nd, finishing 29th. The track had largely dried out by heat two and he set a one minute 10.06 second lap, just dropping one place to 25th. Heat three he started 5th and finished 24th but went marginally quicker with a 1:10:03 lap. 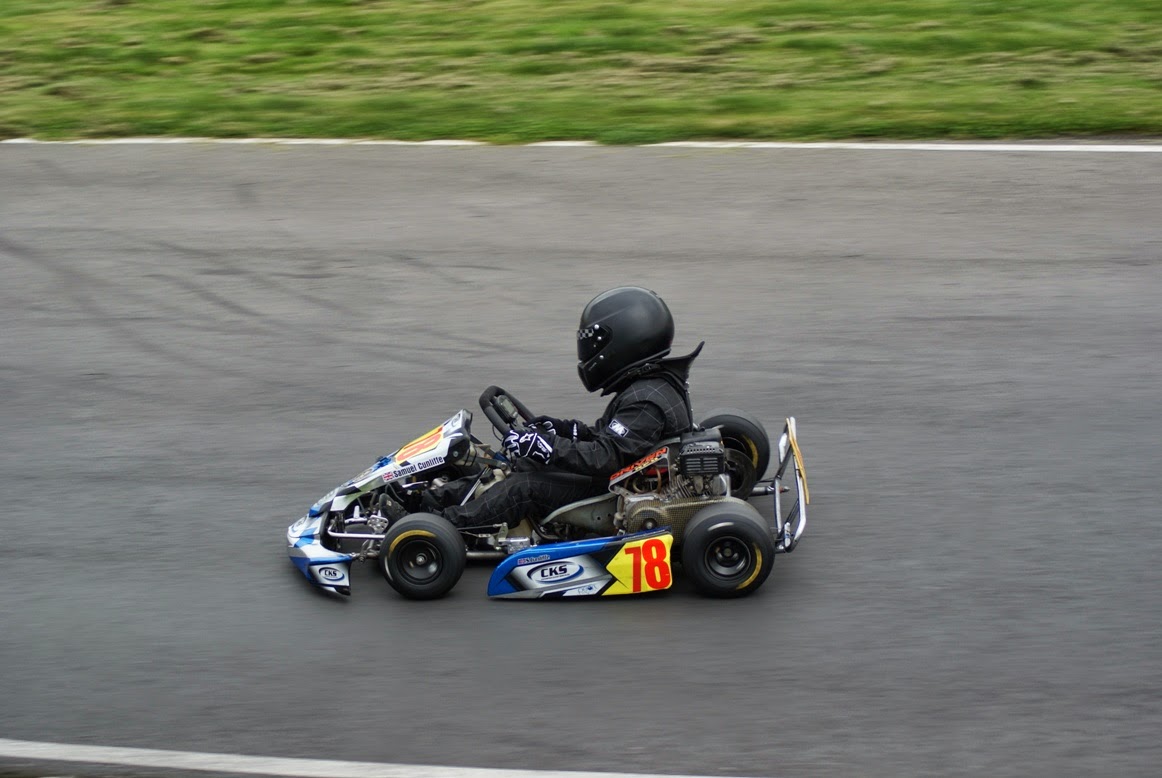 Samuel started 29th in the final and had his best finish with a 23rd and also set his fastest time of the weekend with 1:09:65. 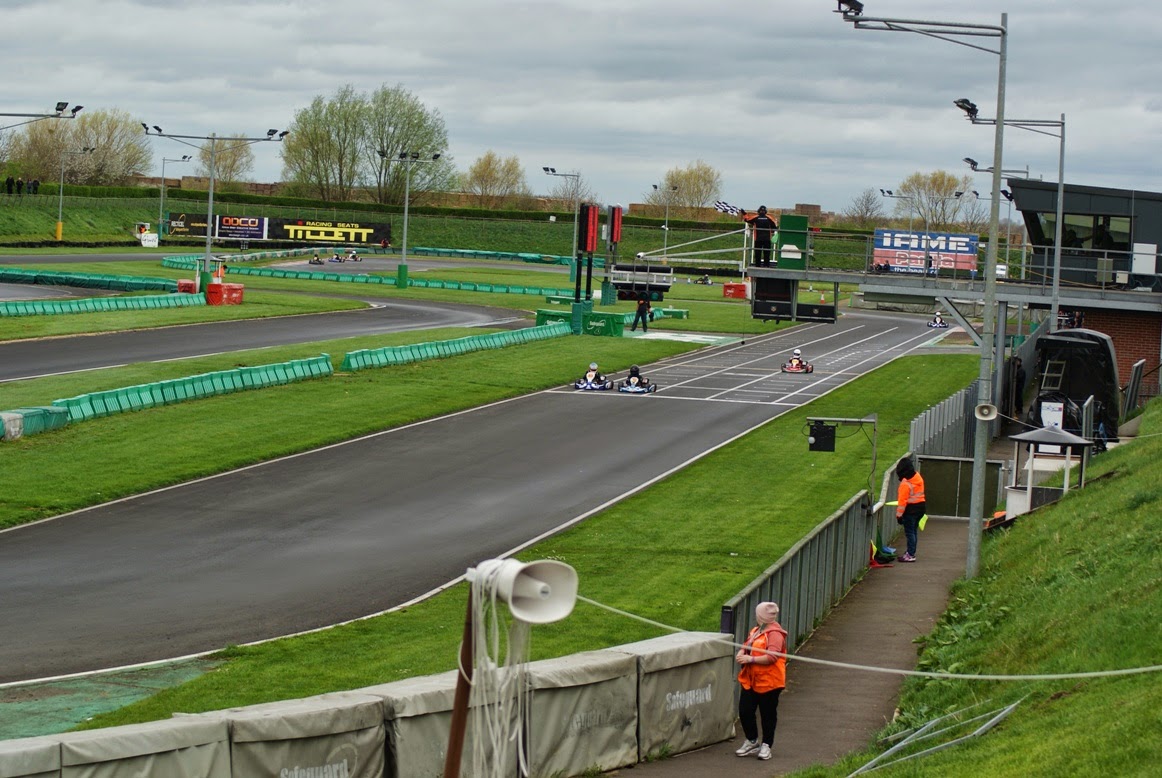 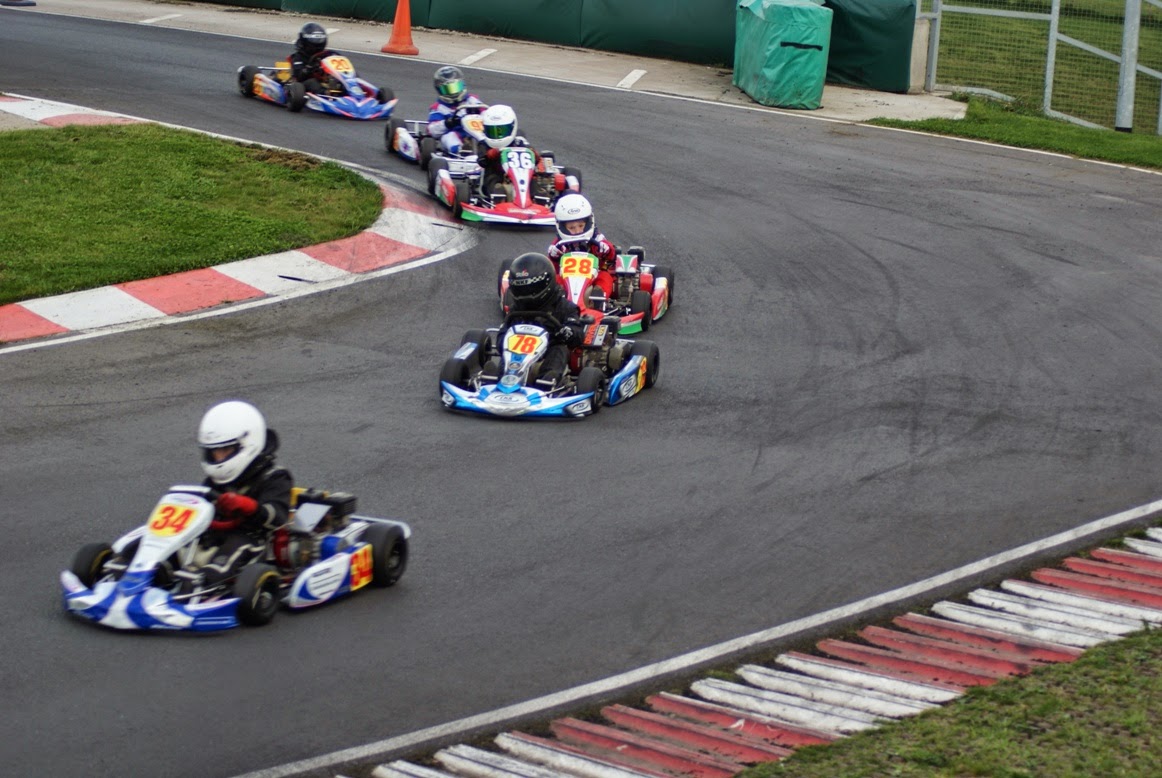 The NKF Championship was held at the same time as the TVKC club race but as we don't yet know how many Honda Cadets are entered, we don't yet know where Samuel finished or how many points he collected. Round 2 will be at Rowrah.
Posted by samuelandjacob at 20:30 No comments:

Round 3 of Manchester and Buxton Kart Club Championship took place on 23 March and the weather was more spring like than the previous round.

The random grid placings saw Samuel start 4th in the first heat and finish 3rd with a fastest lap on the club circuit of 51.20 seconds. He then finished in 2nd in the second heat with a faster time of 49.70; third heat he again finished second from a start position of third and almost went sub 49 seconds with a 49.13 fastest lap.

In the final he started third due to his heat finishes and retained the place across the finish line but managed to go even faster with a 48.70 second lap. 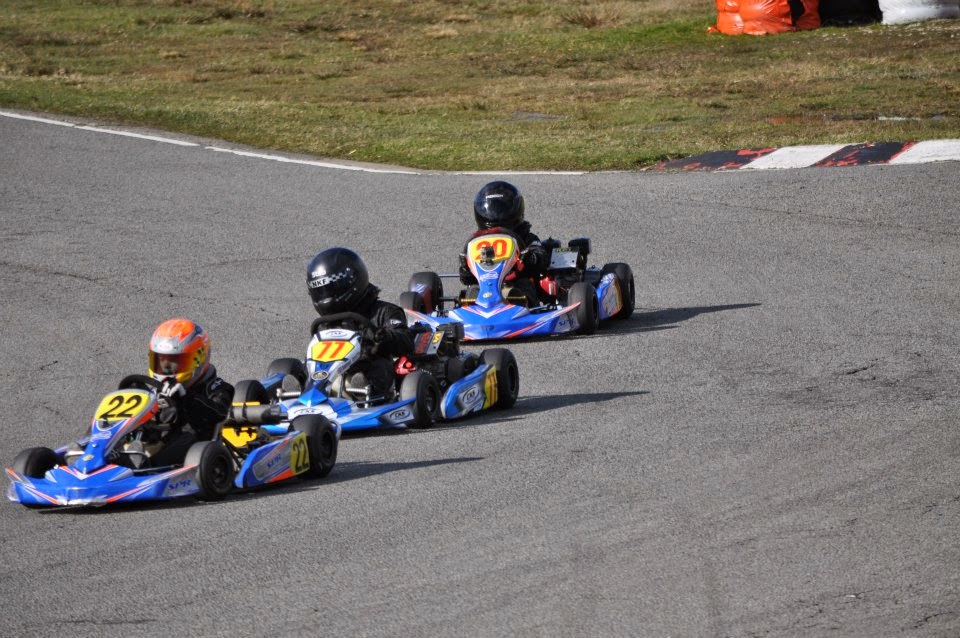 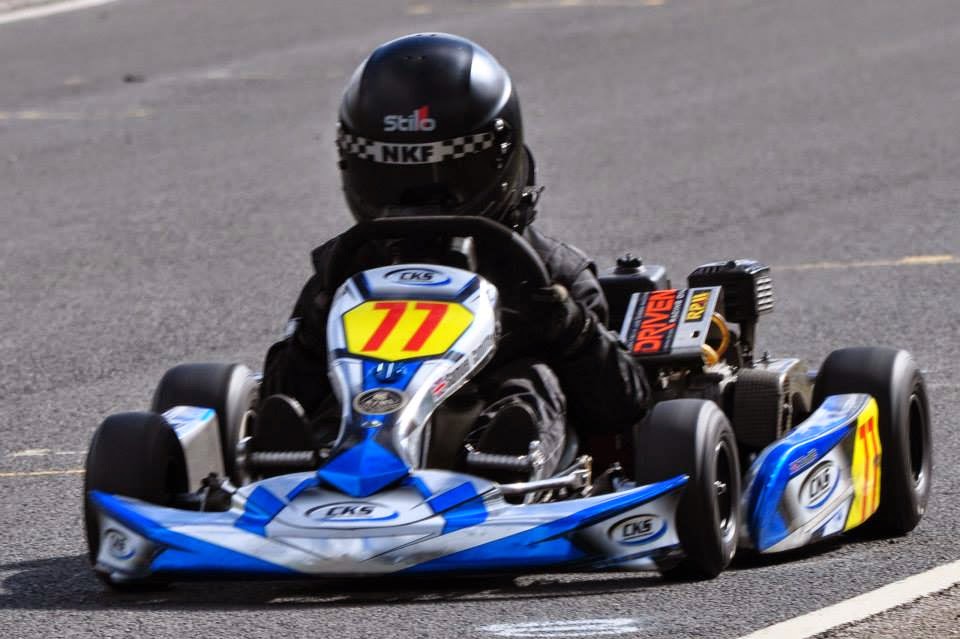 Posted by samuelandjacob at 13:00 No comments:

Round of Cheshire Kart Racing Club Championship and the Cheshire Oaks Trophy and Samuel started with maximum points from round 1 the previous month. Through all three heats he dominated the field with a 7 second lead in the first and a 14 second lead in the second heat. Even after starting 4th in the third heat, Samuel had moved up to second by the end of the first lap but after a tustle in lap two, of which he came of worst, he dropped to 4th place but by the 5th lap he'd regained his lead.

He crossed the finish line with an impressive 17 second lead but he actually set his fastest lap time of the day in the second heat with a 43.13 which meant he had taken the fastest lap of the day and set another season lap record for the track.

Here he is on the podium along with the top Honda Novice and the Comer winner. 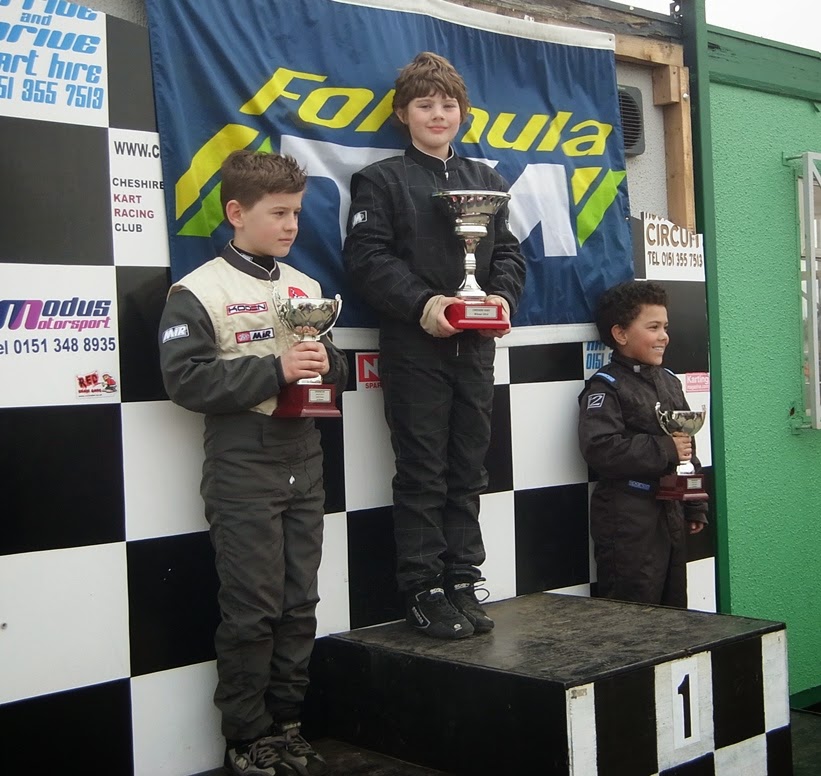 Posted by samuelandjacob at 17:30 No comments:

Round 2 for MBKC Championship and it was wet! Not that it's a problem for Samuel as he enjoys racing in the wet and more so when its on the valley circuit!

He came second in the first two heats and was just 3.3 seconds behind the leader in the second heat. He then went from 4th to first in the third heat with a comfortable 7 second lead.

Here is a photo from the MBKC Facebook page of Samuel leading the Hondas. 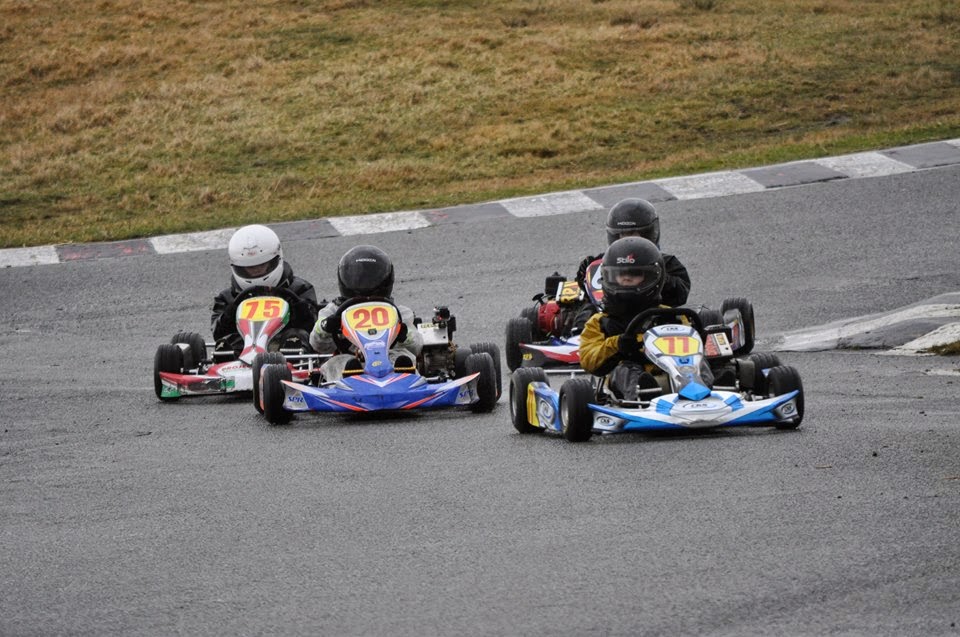 He was placed second on the grid for the final and managed to get past the leader to take the chequered flag and the top step on the podium with a 4.5 second lead. 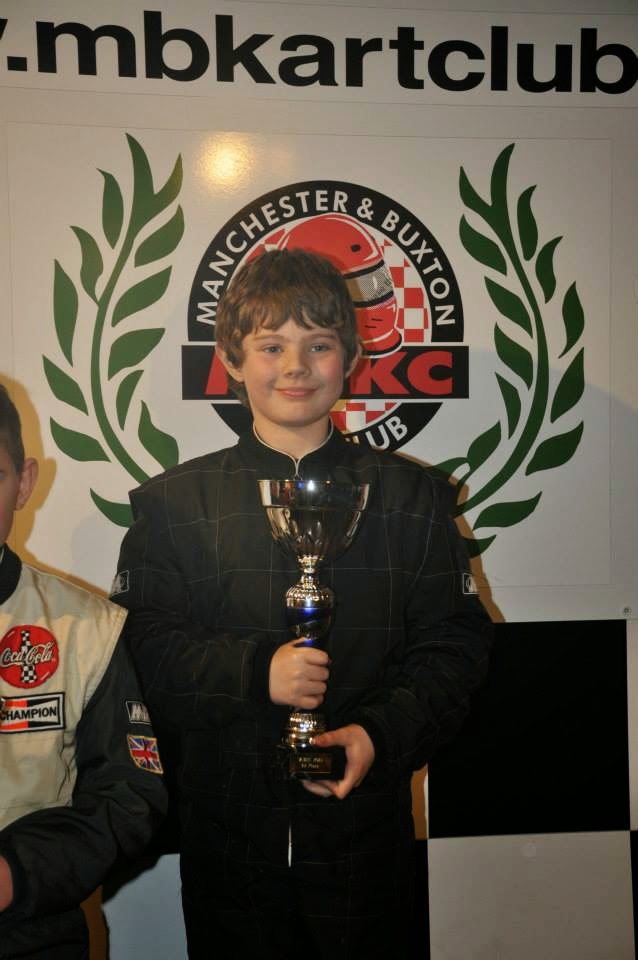 Photos from MBKC Facebook page
Posted by samuelandjacob at 16:30 No comments:

The first round of the Cheshire Kart Racing Club 2014 championship took place on 16 February. It was rather cold - typical February weather! The random grid placings placed Samuel at different grid start places across the three rounds however he finished in first place for each of them with progressively quicker times - 49.79, 45.42 and 44.72.

In the second heat he finished a clear 5 seconds ahead of the next placed driver and set the fastest laps in both heats one and two.

In the final he started first and finished first with a 6 second margin to the second placed driver and in the fastest time of the day (setting a new season lap record) with 44.27. The final wasn't without drama - in lap 7 he dropped back to 2nd place but pulled it back by the tenth lap. 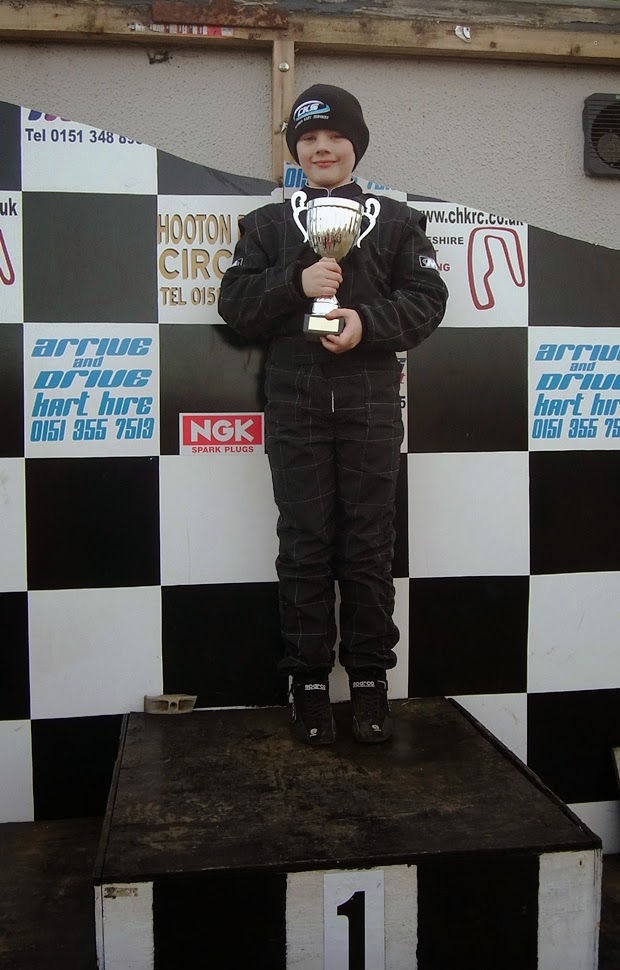 Posted by samuelandjacob at 15:50 No comments:

Samuel had a trip up to Rowrah the home of Cumbria Kart Racing Club and their first round of the 2014 Championship. One of the rounds of the NKF (Northern Karting Federation) Championship takes place at Rowrah so its useful experience for him.

He started the final in 4th place and finished 5th with his fastest lap of the day being 59.87. A good weekend which will help him later in the year when he races there again.
Posted by samuelandjacob at 12:30 No comments:

The first round of the Manchester and Buxton Kart Club 2014 Championship took place on 26 January. There were 6 Honda Cadets racing on the Club circuit. The random grid placings for the heats meant that Samuel started in 3rd for the first heat.

Between lap one and two he dropped to the back of the pack but managed to pull back to 4th by the fifth lap. He finished the heat in 4th place with 54.72 lap as his fastest.

For both heats 2 and 3 he started in second and finished in third with times of 54.78 and 54.16 respectively. In the third heat he was leading the race by the end of the first lap but had fallen back to third by lap three.

In the final he started third and after the first lap he was up to second place but ended up as third by the third lap which is where he finished with his best time of the day - 53.66.
Posted by samuelandjacob at 11:00 No comments:

The Cheshire Kart Racing Club 2013 Championship presentations took place on Saturday 18 January. Samuel collected the Honda Cadet title and was presented with the winners trophy inscribed with his name (he is the first Honda Cadet winner!), a trophy to keep and also a large colour print of him on track. Posted by samuelandjacob at 10:30 No comments:

On Saturday 11 January Manchester and Buxton Kart Club held their Winter Ball and Presentation for the 2013 Championship. Samuel collected two trophies - rather large too!

The first trophy he collected was for the Honda Cadet Autumn Series which he won: 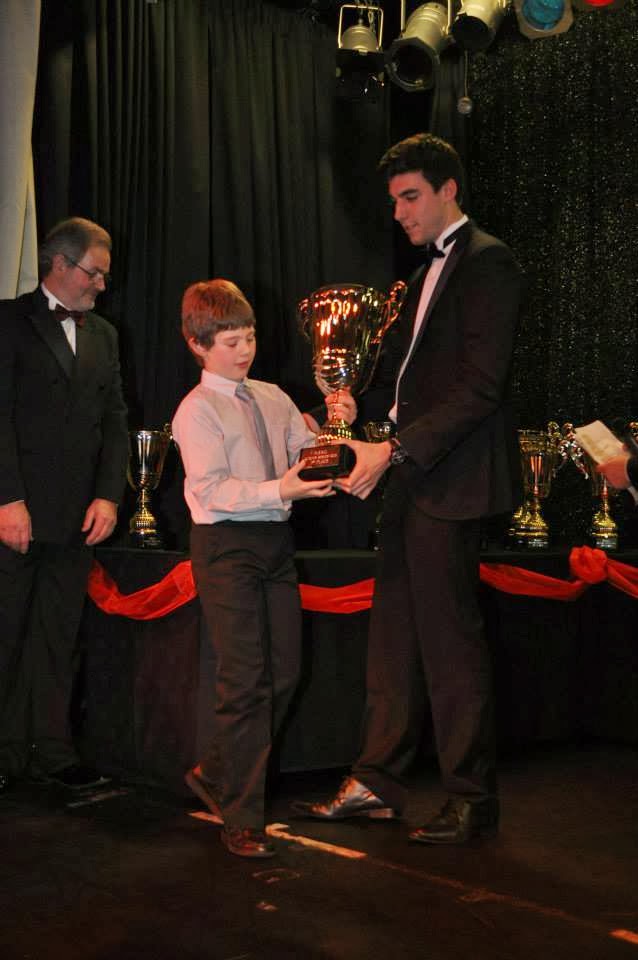 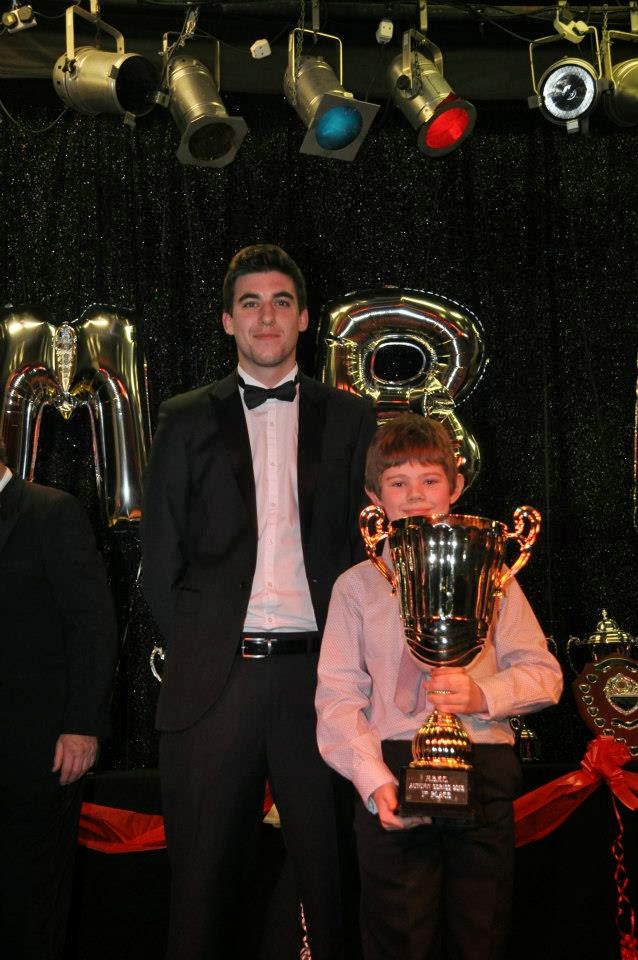 To put it into perspective, the plinth is bigger than his first ever karting trophy!

And then he collected his third place Championship Trophy: 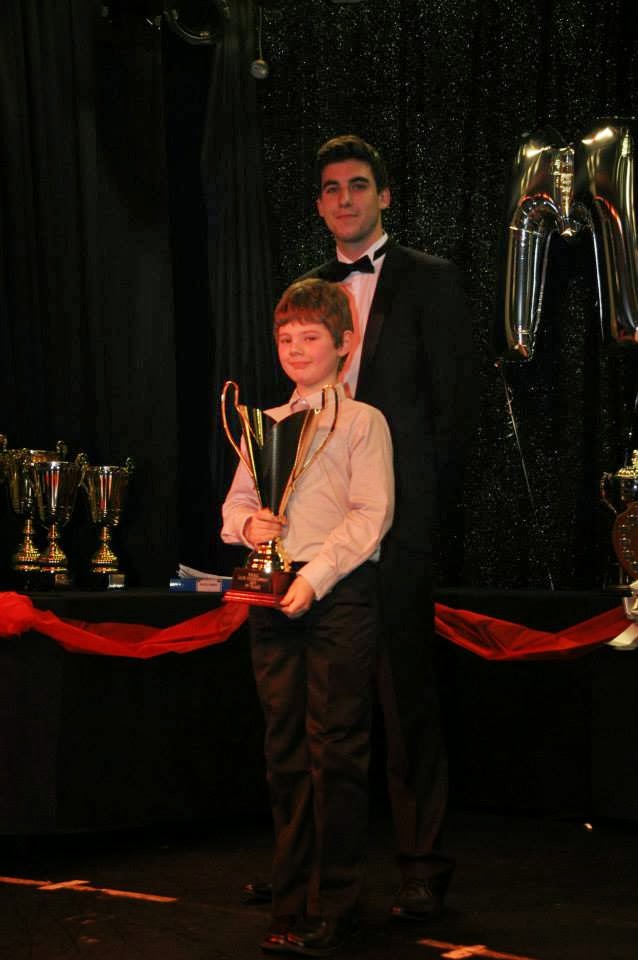 And here he is with both trophies: 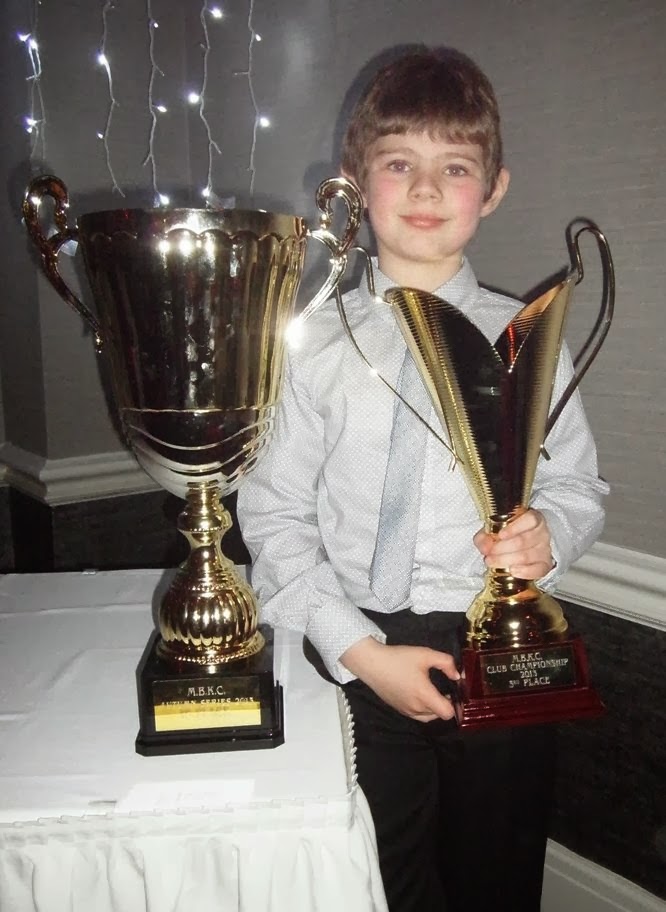 Stage photos courtesy of MBKC facebook page.
Posted by samuelandjacob at 21:45 No comments: